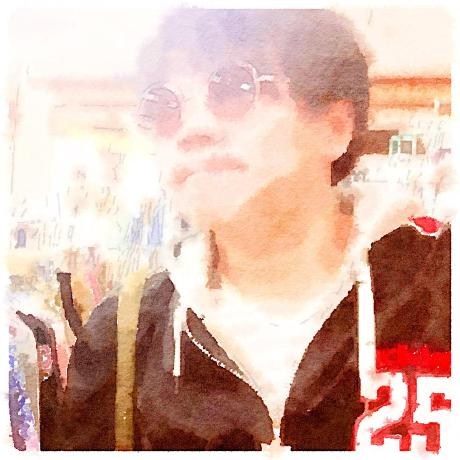 This is a repository with my configuration files, those that in Linux/OS X normally are these files under the $HOME directory that are hidden and preceded by a dot, AKA dotfiles.

The primary goal is to increase CLI productivity on OS X, though many scripts run just fine on any POSIX implementation and it is easy to build environment again by running just the installation command of one-liner.

My primary OS is OS X (10.10.x) and some of these configurations are tuned to work on that platform. The bash files are more generic and friendly toward other Unix-based operating systems. 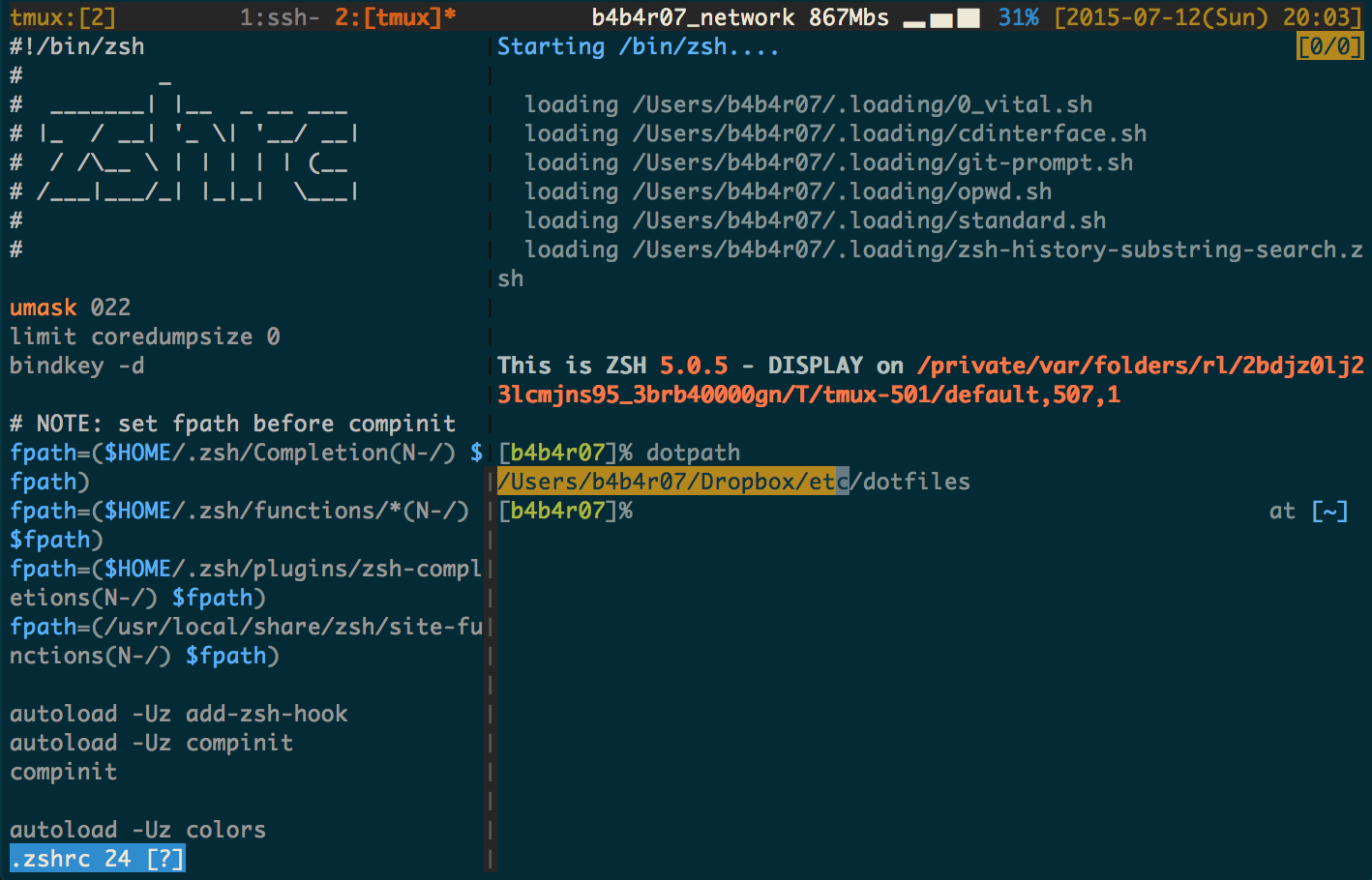 Note: You can clone or fork them freely, but I don’t guarantee that they fit you.

The easiest way to install this dotfiles is to open up a terminal, type the installation command below: Run the following command to set up a new machine:

When the installation command format is not curl -L URL | sh but sh -c "$(curl -L URL)", shell will be restart automatically. If this is not the case, it is necessary to restart your shell manually.

Difference of Installation and Quick Installation is that the latter one-liner is shorter than the former one (including typing the number of shift key). However, because when you install in the Quick installation shell is not re-boot, it is necessary to perform the exec sh yourself.

Actually notation of the shell may be sh instead of bash. Regardless of the sh realities, it is possible to do the same installation process because the script file that is used to the installation command is a shell script that conforms to POSIX.

Note: If you want to use the curl, in order to follow the redirect -L flag is essential. On the other hand, it is possible to omit -s flag because it is meant that silent or quiet mode makes curl mute.

To update later on, just run this command.

In addition, there are several git submodules included in this configuration. On a new installation these submodules need to be initialized and updated.

All configuration files for setup is stored within the etc/init/ directory. By running the command below, you can interactively setup all preferences.

To run make init immediately after running the installation command:

To install the Vim plugins, run this command.

Vim plugins are not installed from you just running the installation command. To install the plugins, you must specify the -c 'NeoBundleInit' as an argument when starting Vim. By doing so, install immediately neobundle.vim and other plugins (requires: git in $PATH, Vim 7.2+, a lot of time, Wi-Fi).

To use these plugins effectively, features of Vim needs normal or more.

The easiest way to change your shell is to use the chsh command. You can also give chsh the -s option; this will set your shell for you, without requiring you to enter an editor.

Note: The shell that you wish to use must be present in the /etc/shells file.

When setting up a new Mac, you may want to perform the following tasks mainly.

All of these are included in the make init for OS X. For more detail, see also here of documentation of OS X operation.

If you have Vagrant and Virtualbox already installed, this is both faster and cleaner than downloading and compiling all the dependencies in OS X. To install, simply do the following:

If you want to try my dotfiles without polluting your development environment, it would be best to use a Vagrant. Have fun by setting and please remove it after finish. 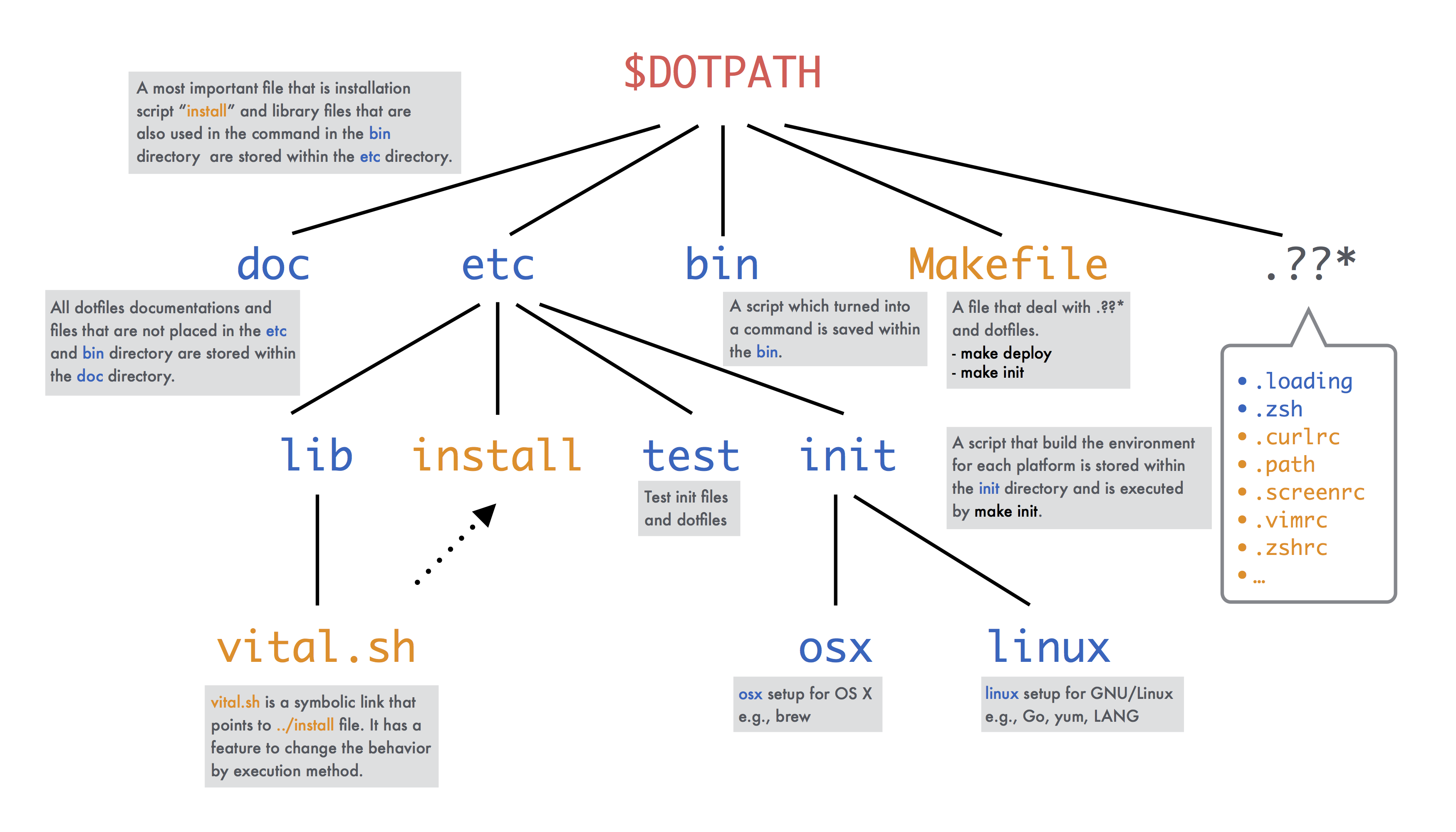 Acknowledgment; I established this dotfiles referring to the following user’s repositories. Thus, I would appreciate it if you used my repository for reference. Thanks.

Unless attributed otherwise, everything is under the MIT licence. Some stuff is not from me, and without attribution, and I no longer remember where I got it from. I apologize for that.

Would you tell us more about b4b4r07/dotfiles?