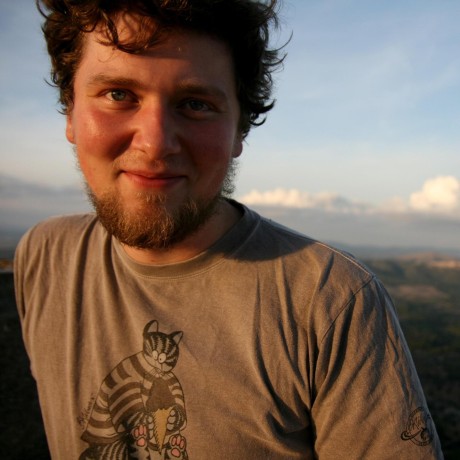 Code coverage for Ruby 1.9+ with a powerful configuration library and automatic merging of coverage across test suites

SimpleCov is a code coverage analysis tool for Ruby. It uses Ruby’s built-in Coverage library to gather code coverage data, but makes processing its results much easier by providing a clean API to filter, group, merge, format, and display those results, giving you a complete code coverage suite that can be set up with just a couple lines of code.

In most cases, you’ll want overall coverage results for your projects, including all types of tests, Cucumber features, etc. SimpleCov automatically takes care of this by caching and merging results when generating reports, so your report actually includes coverage across your test suites and thereby gives you a better picture of blank spots.

The official formatter of SimpleCov is packaged as a separate gem called simplecov-html, but will be installed and configured automatically when you launch SimpleCov. If you’re curious, you can find it on Github, too. 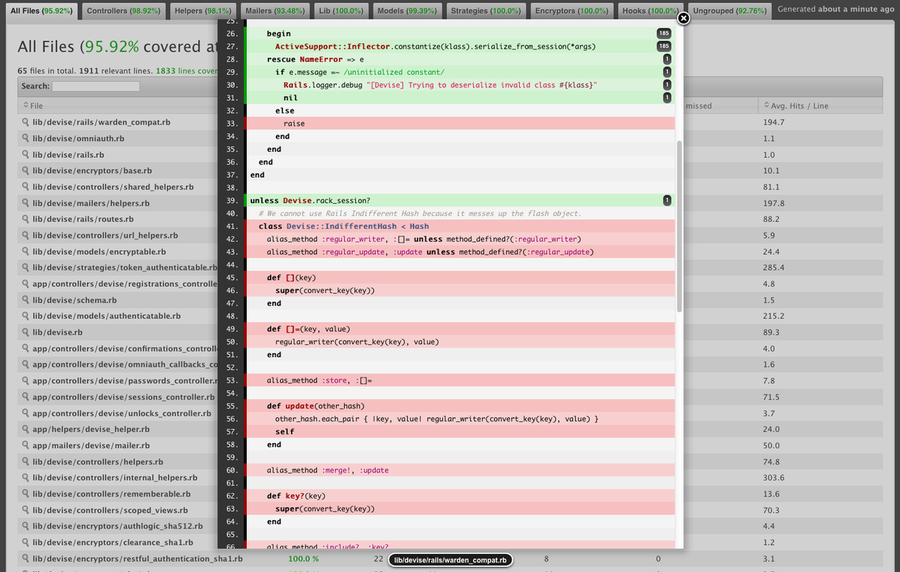 Use it with any framework!

Similarly to the usage with Test::Unit described above, the only thing you have to do is to add the SimpleCov config to the very top of your Cucumber/RSpec/whatever setup file.

Add the setup code to the top of features/support/env.rb (for Cucumber) or spec/spec_helper.rb (for RSpec). Other test frameworks should work accordingly, whatever their setup file may be:

You could even track what kind of code your UI testers are touching if you want to go overboard with things. SimpleCov does not care what kind of framework it is running in; it just looks at what code is being executed and generates a report about it.

For some frameworks and testing tools there are quirks and problems you might want to know about if you want to use SimpleCov with them. Here’s an overview of the known ones:

Configuration settings can be applied in three formats, which are completely equivalent:

Please check out the Configuration API documentation to find out what you can customize.

If you use SimpleCov to merge multiple test suite results (e.g. Test/Unit and Cucumber) into a single report, you’d normally have to set up all your config options twice, once in test_helper.rb and once in env.rb.

To avoid this, you can place a file called .simplecov in your project root. You can then just leave the require 'simplecov' in each test setup helper and move the SimpleCov.start code with all your custom config options into .simplecov:

Filters can be used to remove selected files from your coverage data. By default, a filter is applied that removes all files OUTSIDE of your project’s root directory - otherwise you’d end up with billions of coverage reports for source files in the gems you are using.

You can define your own to remove things like configuration files, tests or whatever you don’t need in your coverage report.

You can currently define a filter using either a String (that will then be Regexp-matched against each source file’s path), a block or by passing in your own Filter class.

This simple string filter will remove all files that match “/test/” in their path.

Block filters receive a SimpleCov::SourceFile instance and expect your block to return either true (if the file is to be removed from the result) or false (if the result should be kept). Please check out the RDoc for SimpleCov::SourceFile to learn about the methods available to you. In the above example, the filter will remove all files that have less than 5 lines of code.

Defining your own filters is pretty easy: Just inherit from SimpleCov::Filter and define a method ‘matches?(source_file)’. When running the filter, a true return value from this method will result in the removal of the given source_file. The filter_argument method is being set in the SimpleCov::Filter initialize method and thus is set to 5 in this example.

You can exclude code from the coverage report by wrapping it in # :nocov:.

The name of the token can be changed to your liking. Learn more about the nocov feature.

Note: You shouldn’t have to use the nocov token to skip private methods that are being included in your coverage. If you appropriately test the public interface of your classes and objects you should automatically get full coverage of your private methods.

Default root filter and coverage for things outside of it

By default, SimpleCov filters everything outside of the SimpleCov.root directory. However, sometimes you may want to include coverage reports for things you include as a gem, for example a Rails Engine.

Here’s an example by @lsaffie from #221 that shows how you can achieve just that:

You can separate your source files into groups. For example, in a Rails app, you’ll want to have separate listings for Models, Controllers, Helpers, and Libs. Group definition works similarly to Filters (and also accepts custom filter classes), but source files end up in a group when the filter passes (returns true), as opposed to filtering results, which exclude files from results when the filter results in a true value.

Add your groups with:

You normally want to have your coverage analyzed across ALL of your test suites, right?

Simplecov automatically caches coverage results in your (coverage_path)/.resultset.json. Those results will then be automatically merged when generating the result, so when coverage is set up properly for Cucumber and your unit / functional / integration tests, all of those test suites will be taken into account when building the coverage report.

There are two things to note here though:

If you have some non-standard setup and still want nicely labeled test suites, you have to give Simplecov a cue as to what the name of the currently running test suite is. You can do so by specifying SimpleCov.command_name in one test file that is part of your specific suite.

To customize the suite names on a Rails app (yeah, sorry for being Rails-biased, but everyone knows what the structure of those projects is. You can apply this accordingly to the RSpecs in your Outlook-WebDAV-Calendar-Sync gem), you could do something like this:

Note that this only has to be invoked ONCE PER TEST SUITE, so even if you have 200 unit test files, specifying it in some_test.rb is enough.

Last but not least if multiple suites resolve to the same command_name be aware that the coverage results will clobber each other instead of being merged. SimpleCov is smart enough to detect unique names for the most common setups, but if you have more than one test suite that doesn’t follow a common pattern then you will want to manually ensure that each suite gets a unique command_name.

If you are running tests in parallel each process has the potential to clobber results from the other test processes. If you are relying on the default command_name then SimpleCov will attempt to detect and avoid parallel test suite command_name collisions based on the presence of ENV['PARALLEL_TEST_GROUPS'] and ENV['TEST_ENV_NUMBER']. If your parallel test runner does not set one or both of these then you must set a command_name and ensure that it is unique per process (eg. command_name "Unit Tests PID #{$$}").

If you are using parallel_tests, you must incorporate TEST_ENV_NUMBER into the command name yourself, in order for SimpleCov to merge the results correctly. For example:

simplecov-html prints the used test suites in the footer of the generated coverage report.

You can deactivate merging altogether with SimpleCov.use_merging false.

Running coverage only on demand

The Ruby STDLIB Coverage library that SimpleCov builds upon is very fast (on a ~10 min Rails test suite, the speed drop was only a couple seconds for me), and therefore it’s SimpleCov’s policy to just generate coverage every time you run your tests because it doesn’t do your test speed any harm and you’re always equipped with the latest and greatest coverage results.

Because of this, SimpleCov has no explicit built-in mechanism to run coverage only on demand.

However, you can still accomplish this very easily by introducing an ENV variable conditional into your SimpleCov setup block, like this:

Then, SimpleCov will only run if you execute your tests like this:

By default, SimpleCov’s only config assumption is that you only want coverage reports for files inside your project root. To save yourself from repetitive configuration, you can use predefined blocks of configuration, called ‘profiles’, or define your own.

You can then pass the name of the profile to be used as the first argument to SimpleCov.start. For example, simplecov comes bundled with a ‘rails’ profile. It looks somewhat like this:

As you can see, it’s just a SimpleCov.configure block. In your test_helper.rb, launch SimpleCov with:

You can load additional profiles with the SimpleCov.load_profile(‘xyz’) method. This allows you to build upon an existing profile and customize it so you can reuse it in unit tests and Cucumber features. For example:

You can define what SimpleCov should do when your test suite finishes by customizing the at_exit hook:

Above is the default behaviour. Do whatever you like instead!

You can define the minimum coverage percentage expected. SimpleCov will return non-zero if unmet.

You can define the minimum coverage by file percentage expected. SimpleCov will return non-zero if unmet. This is useful to help ensure coverage is relatively consistent, rather than being skewed by particularly good or bad areas of the code.

You can define the maximum coverage drop percentage at once. SimpleCov will return non-zero if exceeded.

You can also entirely refuse dropping coverage between test runs:

Using your own formatter

You can use your own formatter with:

When calling SimpleCov.result.format!, it will be invoked with SimpleCov::Formatter::YourFormatter.new.format(result), “result” being an instance of SimpleCov::Result. Do whatever your wish with that!

As of SimpleCov 0.9, you can specify multiple result formats:

Only Ruby 1.9+ ships with the coverage library that SimpleCov depends upon and that’s what SimpleCov supports. Additionally JRuby 9.1+ is supported as well, while JRuby 1.7 and 9.0 should work they’re not “officially” supported. SimpleCov is also built against Ruby 1.8 in Continuous Integration, but this happens only to ensure that SimpleCov does not make your test suite crash right now.

Want to use Spring with SimpleCov?

If you’re using Spring to speed up test suite runs and want to run SimpleCov along with them, you’ll find that it often misreports coverage with the default config due to some sort of eager loading issue. Don’t despair!

Thanks to Aaron Patterson for the original idea for this!

Code coverage for Ruby 1.9+ with a powerful configuration library and automatic merging of coverage across test suites ...

Would you tell us more about colszowka/simplecov?