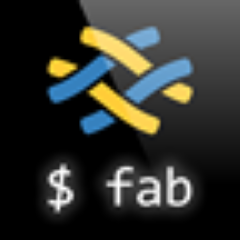 Fabric is a Python (2.5-2.7) library and command-line tool for streamlining the use of SSH for application deployment or systems administration tasks.

Typical use involves creating a Python module containing one or more functions, then executing them via the fab command-line tool. Below is a small but complete “fabfile” containing a single task:

If you save the above as fabfile.py (the default module that fab loads), you can run the tasks defined in it on one or more servers, like so::

In addition to use via the fab tool, Fabric’s components may be imported into other Python code, providing a Pythonic interface to the SSH protocol suite at a higher level than that provided by e.g. the Paramiko library (which Fabric itself uses.)

THIS IS A READ-ONLY historic repository. Current development is at https://gerrit.hyperledger.org/r/#/admin/projects/fabric . pull requests not accepted ...

fabric-graphite is a fabric script to install Graphite and all dependencies on a debian-based host (with optional vagrant support) ...

Fabric colection to deploy Django with nginx and gunicorn in Digital Ocean ...

Would you tell us more about fabric/fabric?