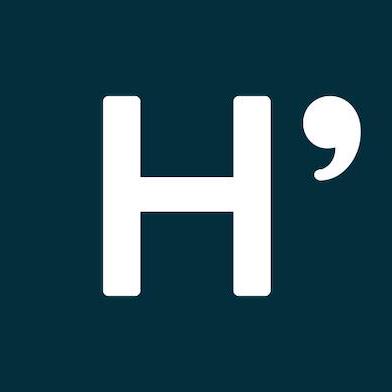 The Rack Based AB testing framework

Split is a rack based ab testing framework designed to work with Rails, Sinatra or any other rack based app.

Split is heavily inspired by the Abingo and Vanity rails ab testing plugins and Resque in its use of Redis.

Split is designed to be hacker friendly, allowing for maximum customisation and extensibility.

Split currently requires Ruby 1.9.2 or higher. If your project requires compatibility with Ruby 1.8.x and Rails 2.3, please use v0.8.0.

Split uses redis as a datastore.

Split only supports redis 2.0 or greater.

If you’re on OS X, Homebrew is the simplest way to install Redis:

You now have a Redis daemon running on 6379.

If you are using bundler add split to your Gemfile:

and require it in your project:

Split is autoloaded when rails starts up, as long as you’ve configured redis it will ‘just work’.

To configure sinatra with Split you need to enable sessions and mix in the helper methods. Add the following lines at the top of your sinatra app:

To begin your ab test use the ab_test method, naming your experiment with the first argument and then the different alternatives which you wish to test on as the other arguments.

ab_test returns one of the alternatives, if a user has already seen that test they will get the same alternative as before, which you can use to split your code on.

It can be used to render different templates, show different text or any other case based logic.

finished is used to make a completion of an experiment, or conversion.

Example: Conversion tracking (in a controller!)

Example: Conversion tracking (in a view)

You can find more examples, tutorials and guides on the wiki.

Split has two options for you to use to determine which alternative is the best.

The first option (default on the dashboard) uses a z test (n>30) for the difference between your control and alternative conversion rates to calculate statistical significance. This test will tell you whether an alternative is better or worse than your control, but it will not distinguish between which alternative is the best in an experiment with multiple alternatives. Split will only tell you if your experiment is 90%, 95%, or 99% significant, and this test only works if you have more than 30 participants and 5 conversions for each branch.

As per this blog post on the pitfalls of A/B testing, it is highly recommended that you determine your requisite sample size for each branch before running the experiment. Otherwise, you’ll have an increased rate of false positives (experiments which show a significant effect where really there is none).

Here is a sample size calculator for your convenience.

The second option uses simulations from a beta distribution to determine the probability that the given alternative is the winner compared to all other alternatives. You can view these probabilities by clicking on the drop-down menu labeled “Confidence.” This option should be used when the experiment has more than just 1 control and 1 alternative. It can also be used for a simple, 2-alternative A/B test.

Perhaps you only want to show an alternative to 10% of your visitors because it is very experimental or not yet fully load tested.

To do this you can pass a weight with each alternative in the following ways:

This will only show the new alternative to visitors 1 in 10 times, the default weight for an alternative is 1.

For development and testing, you may wish to force your app to always return an alternative. You can do this by passing it as a parameter in the url.

If you have an experiment called button_color with alternatives called red and blue used on your homepage, a url such as:

will always have red buttons. This won’t be stored in your session or count towards to results, unless you set the store_override configuration option.

In the event you want to disable all tests without having to know the individual experiment names, add a SPLIT_DISABLE query parameter.

It is not required to send SPLIT_DISABLE=false to activate Split.

By default new AB tests will be active right after deployment. In case you would like to start new test a while after the deploy, you can do it by setting the start_manually configuration option to true.

After choosing this option tests won’t be started right after deploy, but after pressing the Start button in Split admin dashboard.

When a user completes a test their session is reset so that they may start the test again in the future.

To stop this behaviour you can pass the following option to the finished method:

The user will then always see the alternative they started with.

Multiple experiments at once

By default Split will avoid users participating in multiple experiments at once. This means you are less likely to skew results by adding in more variation to your tests.

To stop this behaviour and allow users to participate in multiple experiments at once enable the allow_multiple_experiments config option like so:

Split comes with three built-in persistence adapters for storing users and the alternatives they’ve been given for each experiment.

By default Split will store the tests for each user in the session.

You can optionally configure Split to use a cookie, Redis, or any custom adapter of your choosing.

Note: Using cookies depends on ActionDispatch::Cookies or any identical API

Using Redis will allow ab_users to persist across sessions or machines.

Your custom adapter needs to implement the same API as existing adapters. See Split::Persistance::CookieAdapter or Split::Persistence::SessionAdapter for a starting point.

You can define methods that will be called at the same time as experiment alternative participation and goal completion.

Set these attributes to a method name available in the same context as the ab_test method. These methods should accept one argument, a Trial instance.

If you are running ab_test from a view, you must define your event hook callback as a helper_method in the controller:

You can assign a proc that will be called when an experiment is reset or deleted. You can use these hooks to call methods within your application to keep data related to experiments in sync with Split.

Split comes with a Sinatra-based front end to get an overview of how your experiments are doing.

If you are running Rails 2: You can mount this inside your app using Rack::URLMap in your config.ru

However, if you are using Rails 3: You can mount this inside your app routes by first adding this to the Gemfile:

Then adding this to config/routes.rb

You may want to password protect that page, you can do so with Rack::Auth::Basic (in your split initializer file)

You can even use Devise or any other Warden-based authentication method to authorize users. Just replace mount Split::Dashboard, :at => 'split' in config/routes.rb with the following:

More information on this here 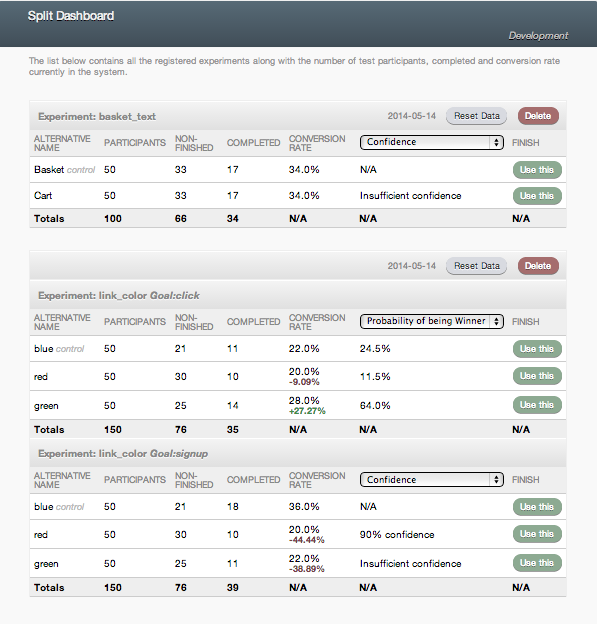 You can override the default configuration options of Split like so:

In most scenarios you don’t want to have AB-Testing enabled for web spiders, robots or special groups of users. Split provides functionality to filter this based on a predefined, extensible list of bots, IP-lists or custom exclude logic.

Instead of providing the experiment options inline, you can store them in a hash. This hash can control your experiment’s alternatives, weights, algorithm and if the experiment resets once finished:

You can also store your experiments in a YAML file:

This simplifies the calls from your code:

You might wish to track generic metrics, such as conversions, and use those to complete multiple different experiments without adding more to your code. You can use the configuration hash to do this, thanks to the :metric option.

Your code may then track a completion using the metric instead of the experiment name:

You can also create a new metric by instantiating and saving a new Metric object.

You might wish to allow an experiment to have multiple, distinguishable goals. The API to define goals for an experiment is this:

or you can you can define them in a configuration file:

To complete a goal conversion, you do it like:

NOTE: This does not mean that a single experiment can have/complete progressive goals.

Bad Example: Test if button color increases conversion rate through multiple steps of a funnel. THIS WILL NOT WORK.

Due to the fact that Redis has no automatic failover mechanism, it’s possible to switch on the db_failover config option, so that ab_test and finished will not crash in case of a db failure. ab_test always delivers alternative A (the first one) in that case.

It’s also possible to set a db_failover_on_db_error callback (proc) for example to log these errors via Rails.logger.

You may want to change the Redis host and port Split connects to, or set various other options at startup.

Split has a redis setter which can be given a string or a Redis object. This means if you’re already using Redis in your app, Split can re-use the existing connection.

For our rails app we have a config/initializers/split.rb file where we load config/split.yml by hand and set the Redis information appropriately.

If you’re running multiple, separate instances of Split you may want to namespace the keyspaces so they do not overlap. This is not unlike the approach taken by many memcached clients.

This feature is provided by the redis-namespace library, which Split uses by default to separate the keys it manages from other keys in your Redis server.

Simply use the Split.redis.namespace accessor:

We recommend sticking this in your initializer somewhere after Redis is configured.

Outside of a Web Session

Alternatively, you can access the underlying Metric, Trial, Experiment and Alternative objects to conduct experiments that are not tied to a web session.

By default, Split ships with Split::Algorithms::WeightedSample that randomly selects from possible alternatives for a traditional a/b test. It is possible to specify static weights to favor certain alternatives.

Split::Algorithms::Whiplash is an implementation of a multi-armed bandit algorithm. This algorithm will automatically weight the alternatives based on their relative performance, choosing the better-performing ones more often as trials are completed.

To change the algorithm globally for all experiments, use the following in your initializer:

Ryan bates has produced an excellent 10 minute screencast about split on the Railscasts site: A/B Testing with Split

Special thanks to the following people for submitting patches:

Tests can be ran with rake spec

Split a Webpack entry bundle by path into any number of arbitrarily defined smaller bundles ...

Would you tell us more about harrystech/split?