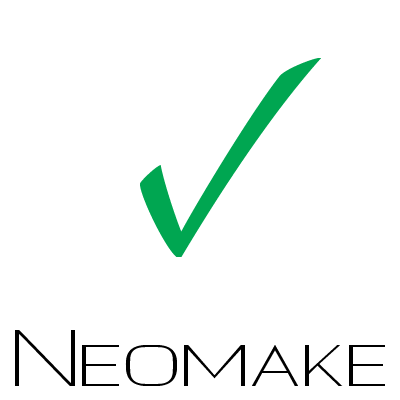 Neomake is a plugin that asynchronously runs programs using Neovim’s or Vim’s job-control functionality. It is intended to replace the built-in :make command and provides functionality similar to plugins like syntastic and dispatch.vim. It is primarily used to run code linters and compilers from within Vim, but can be used to run any program.

If your makeprg should run on the file in the current buffer (like most linters, e.g. you would normally type eslint myfile.js), then you can use :Neomake.

Here’s an example of how to run Neomake on the current file on every write:

The make command will be run in an asynchronous job. The results will be populated in the window’s quickfix list for :Neomake! and the location list for :Neomake as the job runs. Run :copen or :lopen to see the whole list.

If you want to run a specific maker on the file you can specify the maker’s name, e.g. :Neomake jshint. The maker must be defined for the filetype.

Taking a page from the book of syntastic, you can configure “makers” (called “checkers” in syntastic) for different filetypes. Here is an example configuration that is already included with this plugin:

For use with the :Neomake command (makers that run on an individual file), it is critical that makers follow this naming convention:

Explanation for the strings making up the errorformat can be found by typing :h errorformat in Vim.

If the string '%:p' shows up anywhere in the 'args' list, it will be expand()ed to the full path of the current file in place. Otherwise, the full path to the file will be add()ed to the end of the list, unless the maker’s 'append_file' option is set to 0. You can customize the program that is called by adding an 'exe' property which should be a string (defaults to the name of the maker).

Once you have created your makers, run :Neomake as normal. Run :Neomake <checker-name> to run only a single checker. Configuring a filetype to use makers will currently cause the makeprg to be ignored (this should be remedied).

Refer to the inline documentation :h neomake.txt for more.

Also commonly referred to as “Project makers”, though they technically run from the current working directory only since Vim does not know what a “project” is.

Directory makers (these do not require the current filename, e.g. make or grunt build) should be set using Vim’s makeprg and errorformat options. Then run the maker using:

In constrast to :Neomake (without the exclamation mark), this will execute the defined maker in Vim’s current directory, and will not pass the filename to the maker.

If you want to run a specific maker in the current working directory you can specify the maker’s name, e.g. :Neomake! makeclean. The maker must be defined as a directory maker, e.g., for the makeclean example:

An example of a directory maker is the cargo for Rust, which you should run as :Neomake! cargo. This runs cargo, which both installs dependencies (like PHP’s composer or Node.js’s NVM) and compiles the project by calling rustc.

Another example is mvn, which is the maker name for Apache Maven, a Java project management tool. If you’re working on a Java file that is part of a Maven project, you can use the command :Neomake! mvn to run the mvn install command using Neomake.

Refer to the inline documentation :h neomake.txt for more.

For supplemental information on makers, check out the Makers page in the wiki

If you find this plugin useful, please contribute your maker recipes to the repository! Check out autoload/neomake/makers/**/*.vim to see how that is currently done.

This is a community driven project, and maintainers are wanted. Please contact @blueyed if you are interested. You should have a good profile of issue triaging and PRs on this repo already.

We are using Vader for our tests, and they get run for every pull request in different environments (via Docker also).

Run all tests against your local Neovim and Vim

Run some specific tests for Vim

The docker_test target provides running tests for a specific Vim version. See Dockerfile.tests for the Vim versions provided in the Docker image.

The image for this gets pulled from Docker Hub via neomake/vims-for-tests.

NOTE: the Docker image used for tests does not include (different versions) of Neovim at the moment.

Run all tests against all Vims in the Docker image

Lint as you type using Neomake ...

A vim plugin for running multiple process asynchronously base on neomake. ...

Would you tell us more about neomake/neomake?